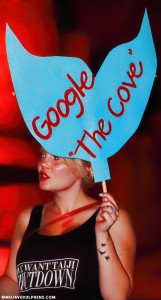 The Dolphin Slaughter Has Begun In Taiji, Japan.

Two days ago, dolphin activists from around the west coast gathered in front of the Mirage volcano to voice their concerns over the continuance of the Taiji dolphin drives in Japan during the global Japan Dolphins Day event. These hunts happen from September 1st through March, with over a thousand dolphins being slaughtered brutally in front of their pod members for their meat each year. The captivity industry is tied to the hunt. 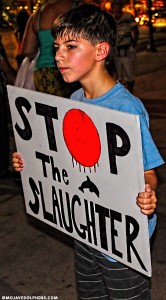 Aquariums around the world visit the killing cove to hand select the dolphins they deem perfect for public display.  Las Vegas was successful in speaking on the Taiji dolphins behalf, handing out fliers to all the tourists who passed by hoping to catch a glimpse of the volcano eruption. We were shocked when we saw a LED billboard truck going up and down the strip displaying an anti-captivity message about dolphins and the cove.

Earlier this year, WAZA (World Associations of Zoos and Aquariums) was being faced with a lawsuit by a coalition of Japanese animal welfare organizations (along with the Dolphin Project and OceanCare) and finally suspended JAZA (Japanese Association of Zoos and Aquariums) for purchasing dolphins coming from the Taiji dolphin drives. JAZA strives to remain part of WAZA for the trade of international animals other than dolphins, so JAZA promised to not source anymore animals from Taiji, and WAZA accepted them back into the family.  JAZA accredited facilities are not to be taking any animals from Taiji this season if they wish to stay accredited by WAZA.

The annual hunt of small cetaceans in Taiji, Japan began today on Sept. 1st 2015. The cove was blue due to storms.The dolphins were able to swim safe and free…..

Ric O’Barry was arrested in Japan on August 31st for not carrying a passport according to his website, DolphinProject.Net:

Ric O’Barry, Founder/Director of Dolphin Project was arrested in the town of Nachikatsuura, a town located in Wakayama Prefecture, Japan at approximately 8:30 p.m. on August 31, 2015 on suspicion of a violation of the Immigration Control and Refugee Recognition Act of Japan. He was reportedly accused of being unable to produce a passport. According to the act, any alien in Japan shall carry on his/her person at all times the passport or provisional landing permit. He is currently being held by Shingu police. Both the U.S. Embassy in Tokyo and the U.S. State Department have been contacted.

Please keep the dolphins of Taiji and the Dolphin Project team in your thoughts for the next 180+ days.

Here are the tweetsheets that were passed around last year to use on those awful days when the cove runs red.

The dolphins of Taiji are unable to use their voice to help themselves. These dolphins do not belong to Japan. They belong to the people of the world. We do not want anymore dolphins to be driven, sold into captivity, or slaughtered for human consumption. We must take it upon ourselves to educate the people and the media to this inhumane practice.